In the 1990s, there was a TV show in the US called Mad TV. The show featured a cartoon called Spy vs. Spy. The two spies in the show were basically identical, but they were adversaries. They had so many similarities, in fact, that they couldn’t ever catch each other. 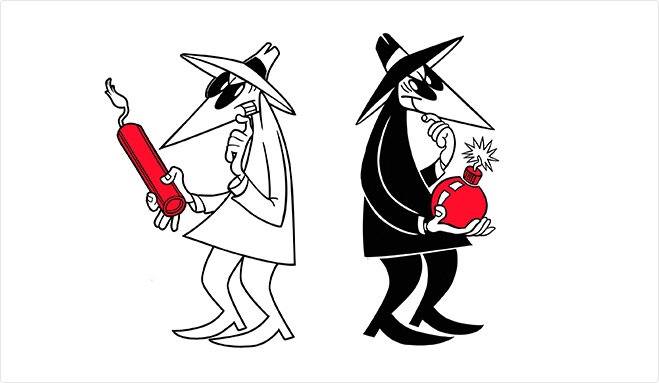 That metaphor is suitable for gamification and game-based learning. There’re so many similarities, but they’re so very different. In this article, we’re going to highlight the contrast and explain the differences between them. 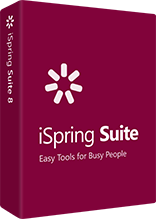 What Are Games & How Do They Work?

Games are actually a challenge or a scenario. They present you with the challenge, and force you to learn new skills and improve your abilities. For instance, when you play baseball for the first time, you try to hit the ball, and you miss it. Over time, after constant repetition and learning the skills, you become a better player.

Andrew says there’s a common mistake when people discuss gamification and game-based learning. They say, “Hey, we want to make a game like Candy Crush.” If you’ve ever been to a casino, there are slot machines everywhere. Your brain’s neurological responses are exactly the same no matter what slot machine you sit down at. So if there’s a really fancy slot machine for Alice in Wonderland, you have the same responses in your brain as you would for an old-fashioned slot machine.

That means that the theme of a game, or the overarching storyline and goals are just a lure to make people start playing.

The most important thing with gamification and serious games is the actual internal mechanics. So if anybody says something to you like, “Oh, we want to make this game, and we want a setting like this,” stop them right there, because the theme doesn’t necessarily matter.

Example one. Farmville is a popular time-based farm management simulator. Ten years ago, if you had walked into a video game company and told them, “Let’s make a game where you do all this work like in the 1900s,” you would have been laughed out of there. Nobody believed that would work. 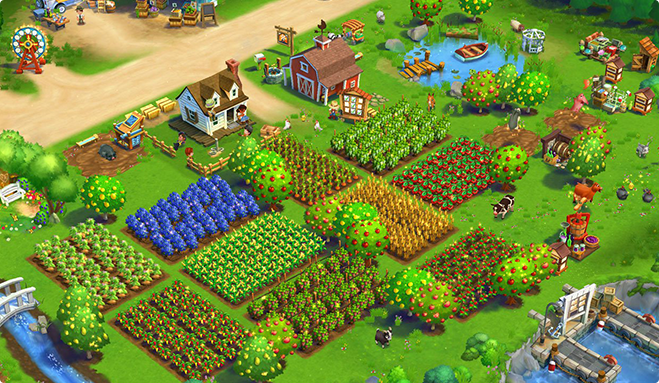 But now people are actually interested in these games. Not because they like back-breaking farming, but because these games have become of interest to them as a society. This applies not just to Farmville, but to many other games like Clash of Clans, The Simpsons Tapped Out, Family Guy, etc.

Example two. When it comes to building out a useful game experience, one of the greatest examples is Pizza Hero by Domino’s Pizza. In this game, you learn how to build the pizzas that Domino’s makes. There’s a timer, recipes, points, etc.

However, Domino’s took this to a completely different level. Not only did they build this game and present it to the public, but they went ahead and reached out to the most active 5,000 players and attempted to hire them, because they had already been trained on how to make the pizzas on offer at Domino’s. This is a great way of showing how a serious game can be an effective learning tool.

What actually is gamification? Andrew illustrates it with a situation from his life.
He was raking fallen leaves, and asked some children to help. The kids managed to help for a whole five seconds before becoming disinterested. But the next time he got a small trophy, a whistle, two trash bags, and a timer. And that time the kids had fun.

Gamification is all about taking a boring process like a meeting or paperwork, and adding four special components, so that users have more motivation to complete the process. These four components are:

​
Example three. Class Dojo is a classroom system. It’s a free open source resource for class instructors. Class Dojo allows instructors to create leaderboards and point systems to keep track of students and see how well they are doing. 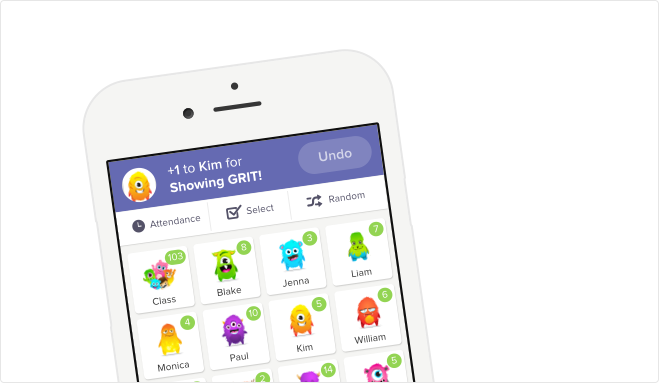 A teacher walks around a classroom with a smartphone, and when students do what they are supposed to do, they get a positive reaction. Kim answered a difficult question, so she gets +1 for her grit. Her avatar, a yellow one-eyed alien, is jumping with joy.

Example four. This is what you see with the whole health boom in the wearable devices industry. There’re various fitness bands like Nike FuelBand, Fitbit, and smart watches that come with a heartbeat monitor. 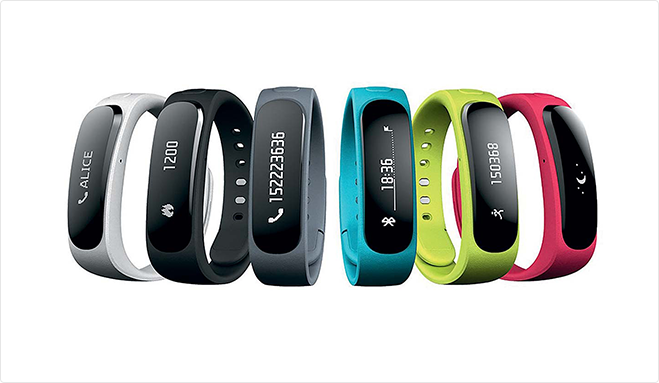 This is a good example of gamification because they’re putting points behind your movement and activity. Some people don’t like to move as much as we should. So knowing that they’re making progress through points makes it more fun to do.

But here’s the problem with that. Sometimes leaderboards can be ineffective if you have overachievers. If your users have unattainable goals, they will have no incentive to move forward. So the leaderboard should be relatively limited in scope, even if you’re doing it for gamification.

Game-based learning is doing competitive exercises to motivate users to learn better. In the world of game consoles, there’s a game called Call of Duty. If you ask people who play this game what is the best sniper rifle to use in an urban combat setting, they will answer the question within 10 seconds, because game-based learning has taken place. They learned this information to be able to survive within the game, and that’s what game-based learning is. And it’s not gamification.

Gamification is taking something very boring and adding game elements to it. Game-based learning is actually learning and improving a skill to survive within an established game.

Example five. One of the best examples of game-based learning that has ever been created is Carmen Sandiego. When developers built this game in 1985, they had no intention of teaching geography to kids. But they used countries and cities as a medium to be able to hide the main character, Carmen Sandiego. Your goal is to learn about these places and try to find her. This game taught many people geography but had zero intention of doing that. 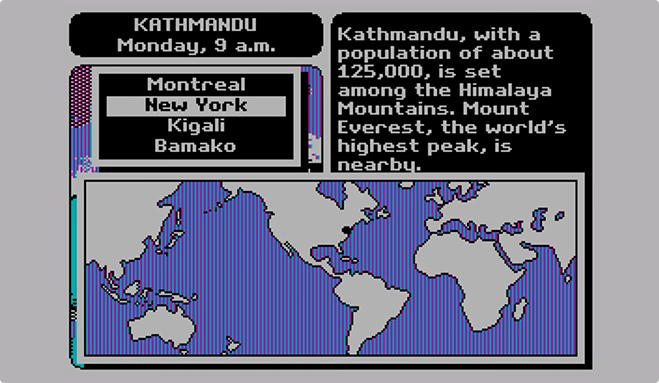 Example six. Another great example is the game Assassin’s Creed III. The developers built an exceptional game where they depicted the American Revolutionary War. Some people learned more about this event from the game than they ever did in their studies. 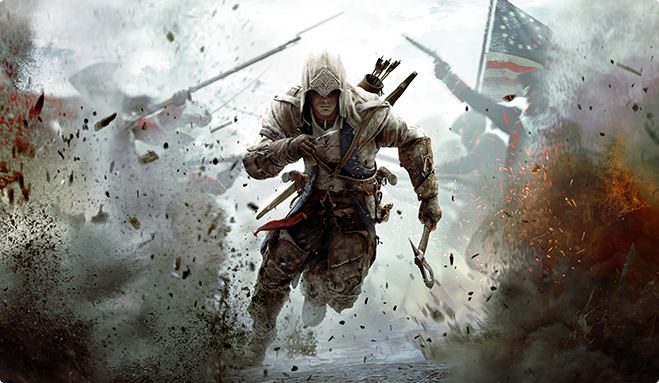 The reason is that human beings don’t really learn something until they experience it. You can be told about the Boston Tea Party, all the epic battles, and how the settlers treated the native Americans, but you never get to experience it until you play this game. And once you’ve played, you have a newfound understanding of the history of the establishing of America.

What we also see in the industry is a lot more device usage for game-based learning. Things like Leap Motion, Microsoft Kinect, Oculus Rift, Google Glasses, Hive, and a handful of other virtual environment devices. Andrew believes that we’re a couple of years off before these things will be brought to the corporate world.

Example seven. Designing Digitally built a serious game with motion tracking devices for air marshals. In this game, you do the air marshal’s eight signals, and your goal is to get an airplane through an obstacle course. The faster you move your arms and show the signals, the faster the plane moves. 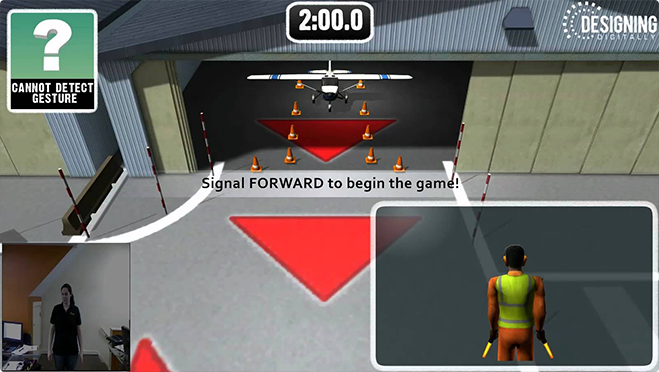 Gameful design considers the user experience prior to adding any game elements. A good example of gameful design is Domino’s Pizza’s pizza tracker. It tracks how long it will take for you to get your pizza. This tracker is not actually a game, but it gives you something fun to watch while you wait.

So, if there’s no gameplay but it’s fun to watch, that’s gameful design (pizza tracker).

If it has a purpose but little to no gameplay, that’s gamification (raking leaves).

If it has a purpose and gameplay, that’s a serious game (air marshals).

If it has gameplay and it’s just for fun, that’s a game (Assassin’s Creed). 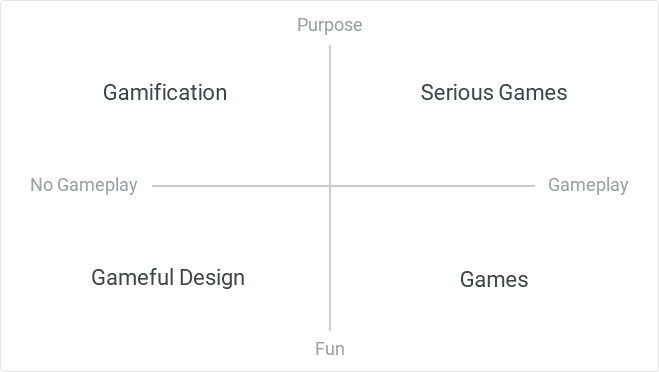 To wrap up, here’re the best practices of the development process: iSpring editor and boots-on-the-ground author. She’s always ready to share in-depth insights on the most hardcore eLearning topics with her readers.