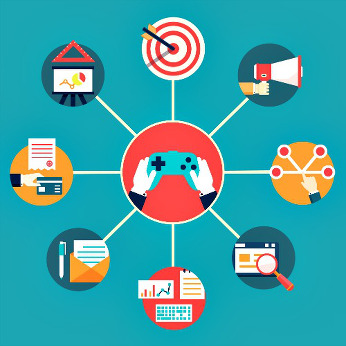 In Stockholm, Volkswagen and the Swedish National Society for Road Safety paired up to put a theory coined by Kevin Richardson to the test. This theory asked the question; would drivers respect the speed limit just for fun?

To test this, they installed a lottery radar speeding camera. This camera would penalize drivers who drove above acceptable speeding limits, and issue a lottery ticket to those who didn’t. The prize offered by the lottery ticket went up with each penalized driver. The results were obvious. Once the elements of a game were introduced and added a competitive edge, more drivers observed the speed limits than without the added game.

This is an example of a process known as gamification, a term coined sometime in 2002 and has been widely used ever since. By definition, gamification is the process of introducing game elements to other tasks, such as learning. By doing this it creates a sense of friendly competition between the players, much like the one seen between players of sports and other fun competitive activities. Some of these elements include achievement, desire for competition, recognition, status, and altruism.

Recently, gamification has been making large leaps in eLearning fields. This is because gamification elements help keep students engaged and motivate them to try their best. In fact, there is extensive evidence which shows that gamification is an effective tool for increasing the levels of motivation and interaction in eLearning systems. In fact, these studies show that 89% of learners would be more enthusiastic and engaged in their eLearning program if it had a point and rewards system.

The main issue facing students today is the fact that traditional learning methods do little to keep the student enthusiastic and motivated. This system has been around for centuries, backed by the idea that students and learners want to be stuck doing something for hours on end without a good reason or motivation. This is incorrect, as many teachers are finding out. They should consider the theory coined by John Biggs and Catherine Tang in 2011. This theory states:

Many eLearning sources and classrooms are learning to embrace gamification. For example, the World Peace Game Foundation uses a system of gamification to teach grade school to high school students about the world and political stances between countries. The learners are faced with real-world problems, and must come up with a peaceful solution using their country’s resources. The game is a huge hit among students in all age groups. They report that the game is fun, engaging, and makes you actually think your way out of situations. Gamification has an incredibly bright future in eLearning and many other fields of schooling.

If you would like to know more about how gamification is shaping eLearning, we welcome you to read our blog posts. Additionally, you may contact us with any questions or comments.